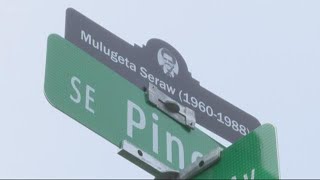 In the wee hours of a Sunday morning in November 1988, the city’s self-image as a tolerant place was shattered.

Many Portlanders, even those who’ve lived here for decades, know little about the murder of Mulugeta Seraw. But in the wee hours of a Sunday morning in November 1988, an Ethiopian immigrant was killed—and the city’s self-image as a tolerant place was shattered.

On Nov. 13, 1988, at the intersection of Southeast 31st Avenue and Pine Street, two groups arrived at the apartment building where Mulugeta Seraw, 28, an Ethiopian immigrant, lived. It just so happened that an adjacent apartment building was where Nick Heise, a racist skinhead, lived.

The two men lived so close to each other that, “had they wanted to,” Elinor Langer writes in A Hundred Little Hitlers, “Mulugeta Seraw and Nick Heise could have rigged up an old-fashioned tin-can telephone on a wire between their two units.”

On that evening, Kenneth Mieske, 23, a member of the skinhead group East Side White Pride, and fellow skinheads Kyle Brewster and Steven Strasser were leaving Heise’s apartment after a night of heavy drinking and distributing white-supremacist recruitment fliers in downtown Portland.

Ken Mieske, 23 years old at the time, was the frontman of a local death metal band, and was known by many in the scene as Ken Death.

Steven Strasser, 20 at the time of his arrest, was a street kid and one of the earliest recruits to the Portland skinhead movement.

Seraw and his friends, also Ethiopian, were idling in a friend’s car, just having returned from a party. They were waiting for a parking spot to open up in front of the apartment complex.

At about 1:30 am, a brawl broke out. As Langer describes it, Strasser, Brewster and Mieske pulled up in front of the parked car Seraw and his friends were in and began hollering at them to move.

Tilahule Antneh, a friend of Seraw’s who was also attacked, then told an Oregonian reporter that Mieske, Brewster and Strasser—heads shaved and clad in olive-colored military jackets and work boots—”just opened the door and immediately they came.”

“The women inside the [skinheads’] car [the men’s girlfriends] were shouting. They were saying, ‘Let’s kill him. Kick him,”’ Antneh said. “They [the men] never said anything. They just jumped us.”

This article appears in its entirety at The Willamette Week news paper website. It can be read here.