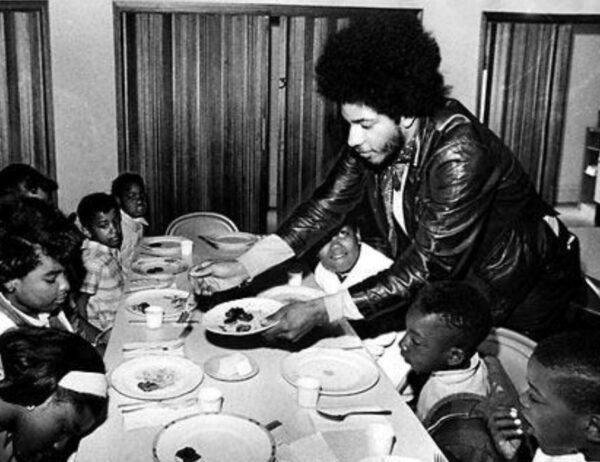 It wasn’t all young men and guns: the Black Panther Party’s programs fed more hungry kids than the state of California

is a narrative journalist and professor at New York University. Her writing has appeared in The New York Times, The Atlantic and The Washington Post, among others. She is the author of Power Hungry: Women of the Black Panther Party and Freedom Summer and Their Fight to Feed a Movement (2021). She lives in Brooklyn, New York.

Starting in 1969, and for several years afterwards, in church basements and community centre kitchens in cities and towns around the United States, thousands of kids sat around a table every school day morning, eating hot breakfast served by the young adults of the Black Panther Party. At each seat there was a plate and utensil setting, a cup and a napkin. The children learned to use their fork and knife properly, eating eggs and grits and bacon and toast, washed down by juice or milk or hot chocolate – whatever local businesses had donated that week.

The Panthers – most of them in their late teens and early 20s, and about two-thirds of them women – had arrived at these community kitchens before dawn to prepare this hot meal for the children, serving them and then checking homework, and giving PE (political education) lessons.

‘Who invented the traffic light?’ a Panther would call out.

‘A Black man!’ the children responded.

They also learned that eating a filling breakfast was a right, and that a full belly helped them pay attention in school. The children – most but not all of whom were Black and Hispanic – were taught about Black and Hispanic inventors and artists and leaders, the stories that were (and still are) so often left out of mainstream histories. For many children, this was the first time they learned that a Black or other person of colour could be an engineer or a scientist or an artist.

The Panthers then taught the children to help clear their plates and pack their bags, and then walked them to school. In places where the Black Panther Party offered their Free Breakfast for Children Program, attendance rates and overall academic performance increased.

The Panthers’ breakfast programme addressed a dire need in communities around the country, but it and their other food justice programmes were always about more than feeding the hungry. They saw these ‘survival programmes’ – what the Panthers’ founders Bobby Seale and Huey P Newton called ‘survival pending revolution’ – as modelling their party’s socialist principles.

This article appears in its entirety the website Aeon. It can be read here.